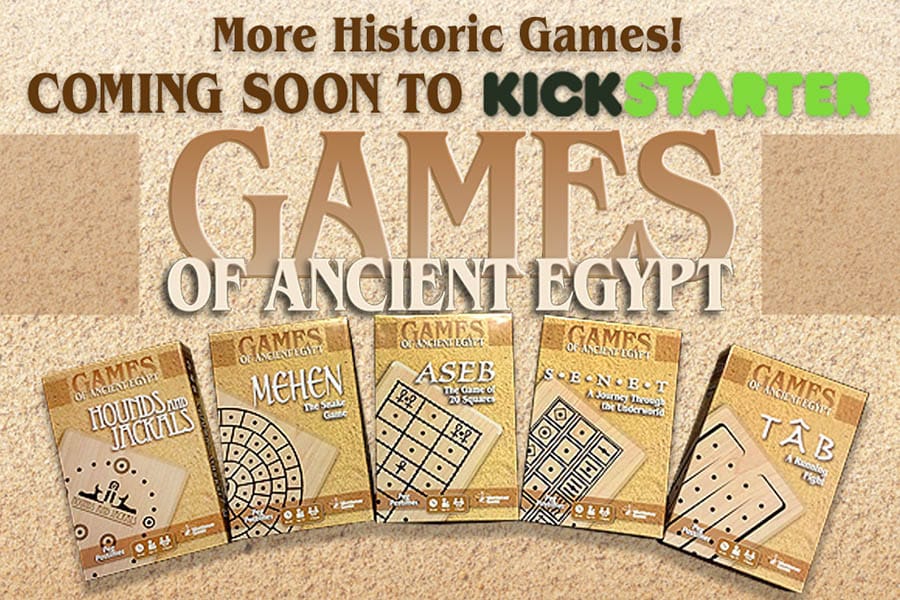 For the board game historian and collector… or a casual family game night.

As a major resource for historical strategy board games, we’re pleased to announce the introduction of our new set of five ancient board games dating back to the age of the pharaohs in Egypt. This collection includes five two-player games that were popular over three thousand years ago. In addition to their historical value, they’re fun!

We’re adding these five new games to the existing catalog of “Peg Pastimes” historical games from around the world. Our existing collection includes over 40 games reproduced from centuries past, from 100 to 5,000 years old. This new set of Egyptian games introduces a new larger format for our peg games.

The new games are twice the size of previous offerings, designed as an integrated set. The games include:

Following a series of successful Kickstarter crowd-funding campaigns, we’re pleased to make this package available to the game-playing community for funding. This Ancient Egypt set is our seventh KickStarter offering, and we’re certain it’ll be another huge success!

These games are perfect for families looking for new, fun games to play, but especially suited to the classroom and libraries. Because the rule booklets convey some of the historical context of the games, they become a gateway to understanding ancient societies and the adventures one can discover in archeological records.

They’ll be available on KickStarter on September 9, 2022! Click here to get started!